In this action-packed episode that defies chronological order, our heroes take you back in time to recap the comic book worlds Best of 2008 (51:15). But first, Paul Huot drops by to give us the Newbie Book Report (05:50). All this, plus some BIG REVEALS – the Near Mint Comic Show will never be the same!

News broke quickly this past week that President Elect Barack Obama will be in a story in Amazing Spider-Man #583 and also featured in a variant cover that you can see here. As a life-long Spider-fan and Obama supporter, this is pretty awesome. It also helps that the future Prez is also likes Peter Parker’s exploits as well.

The issue will be in stores this upcoming Wednesday, January 14th.

But while the story will run in all issues, how to acquire the variant cover and how retailers can acquire them is what’s confusing. From the Newsarama writeup:

“Retailers were informed on December 16th via Diamond Dateline and the retailer portion of the Diamond website that issue #583 would have a special Obama variant cover and include the Inauguration Day backup story, something which would bring the issue up to 40 pages in total, and increase its price point (for both the regular cover and variant cover editions) to $3.99. To stress that last point – the Spider-Man/Obama story is in every issue of Amazing Spider-Man #583, with or without the Obama variant cover.

At that time, the conditions for ordering the Obama variant were that if retailers exceeded their orders for Amazing Spider-Man #583 compared to their orders for issue #575 by the Final Order Cut-off date of December 18th, they would qualify to order as many Obama variant covers as they wished while supplies lasted. To clarify, the cover is not being shipped to retailers in a 50/50 ratio as reported in the mainstream press.”

Issue 575 was the first part of the two-part Hammerhead arc that Ben and I discussed on the last p’cast. It’s reported that the first run has already sold out and that a second printing of the variant is being offered to shops with no restrictions while supplies last.

So at some point, you’ll probably be able to acquire one of these variants…somehow and some places.

Just when you thought it was over, one of Marvel’s most controversial storylines ever has reared its ugly head again. This time, it’s in the pages of newspapers across the country.

Comic fans everywhere remember the infamous Spider-Man storyline that launched in 2008 called One More Day that ended in the eradication of the Spider-Marriage between Peter Parker and Mary Jane Watson. Everything was ret-conned back to a certain point in time that we’re still trying to figure out. The reasoning was nearly universally panned by critics at the time, even though in my opinion, this post OMD-era has been nothing short of fantastic.

Remember the Spider-Man daily comic strip? Well, it’s still running in many newspapers and on December 31st, readers saw this:

And then on New Year’s Day, we got this:

Now I don’t read the strip, mostly because our paper doesn’t carry it and it never comes to mind. However, this is interesting and a further attempt to try to make everything as streamlined as possible. Now if only that long-discussed Spider-Man comic strip compilation book would come out, we could all catch up!

– You can read the strip on the official King features site and get access every day for $15 per year. 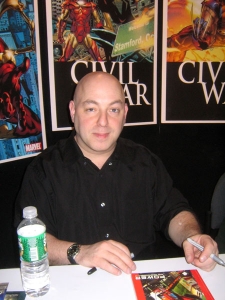 Arguably the most powerful writer in comics today, Brian Michael Bendis did a JinxWorld post and updated his Myspace yesterday with his recap of his 2008. There’s not much newsworthy here, but I thought it was kinda cool. Here it is below in original form:

“As we come to an end of another broadcast year here at jinxworld,I find myself very happy about a great many things…

As some know, my wife and I travelled all the way to Adis Ababa to get our daughter Sabrina, followed by her incredible year here in America.