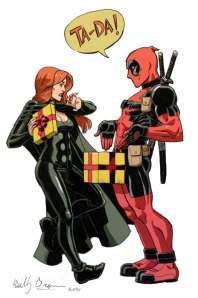 It’s Christmas in the Comic Cave. After tensions ran high last episode, Ben and Josh are back with a new episode overflowing with peace, love and good will towards men, mutants and monsters alike.  We open things up with talk of holiday plans and canceling cable before diving into some spirited comics talk.

Josh, reaffirms his love for Moon Knight and fills us in on the all-new, all-different but slightly-the-same Dark Avengers. Ben talks Legion of Monsters, Hellboy and Atomic Robo. We debate the merits of the Hulks and Josh goes space bananas for Mark Millar’s Superior.

Later we preview the upcoming 2011 Minty Awards and open the Near Mint mailbag and answer a laundry list of listener questions.  It’s the last episode of 2012, so thanks to everyone for listening and enjoy the show – yule love it!

Music in this episode by: Trans-Siberian Orchestra, Dr. Elmo, the Decemberists, Grace Potter & the Nocturnals, Barenaked Ladies, the Whirling Dervishes 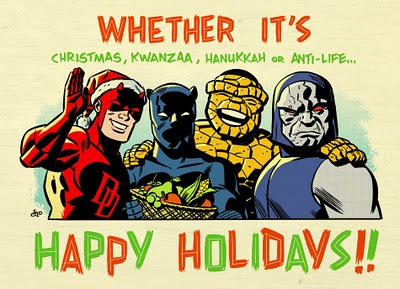 Well folks, the holidays are upon us, as is one of my semi-annual attempts to read a book without pictures. As a result I haven’t read many comics this week, so I’m going to take a week off from the Weekly Hit (and Miss) List. But rather than leave you with nothing to read this week, I dug into the archives and pulled up this article from 2008 (the first year of the Near Mint Comic Show). Enjoy this trip in the not-so-way-back machine, which hopefully (with the help of some fresh updates) will help you find the perfect something for the comics fan on your holiday gift list!

END_OF_DOCUMENT_TOKEN_TO_BE_REPLACED

The Weekly Hit (and Miss) List is a rundown of the best and worst things I read this week regardless of their original publication date. It doesn’t have to be new – just new to me.

Top Shelf Productions is one of my favorite small publishers. They have a knack for finding great talent and getting behind unique projects and I’ve already sung their praises in the March ’11 edition of Comic Book Club when I talked about Rich Koslowski’s B.B. Wolf and the Three LPs. This week I picked up another O.G.N. from Top Shelf and Koslowski called The King. It’s a story of a freelance reporter sent to uncover the truth behind the Vegas phenomenon known as The King. Claiming to be the spirit of Elvis Presley reborn as a God on earth, The King has amassed a huge following of believers. The King is a heartfelt story of faith, skepticism and the power of mystery, beautifully complimented by the art.  A cartoonist in the purist sense of the world, Koslowski’s sparse panel layouts and expressive figures, are a perfect fit for this story that tells us how suggestion can be far more powerful that that which we believe to be true. BUY IT