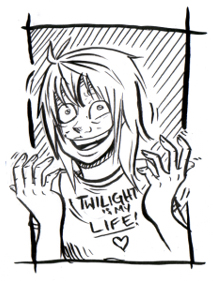 Ben and Josh are back and joined once again by Near Mintern, Greg Giorgio for this mid-summer installment of the podcast. It’s the eve of the San Diego Comic-Con and the ‘tweens are all a Twitter with talk of Twilight.

In this episode, Ben recaps his vacation in Maine, where his love affair with comics started many New Moons ago. Find out why Tron is like a stripper, why bats are like honey and what unhealthy obsession is threatening to Eclipse Ben’s marital bliss.

There’s plenty of comic talk too, with healthy discussions on Avengers books, X-Men: Second Coming, Batman and Robin, Turf, Kick Ass 2, Shadowland and more. All this, plus email questions from Dan Bertwell, whose awesome film blog (Colossus of Rhode Island) we forgot to plug during the show – sorry, Dan.