Near Mint! Comic Show! Party Time! Excellent! In the first half this Herculean episode, we take a trip to the Windy City for a very Marvel-centric rundown of all the announcements coming out of C2E2.   We talk Fear Itself, X-Men, Avengers and Bendis quips until we’re blue in the face, and then we talk some more.  After the convention coverage, its back to the Comic Cave, where Josh mourns the cancellation of The Cape, Ben gives comic recommendations for each of the Oscar-nominated films, and we count down the top 15 sound effects from Assault on New Olympus. Listen, or you will be BREVOOOORTED! 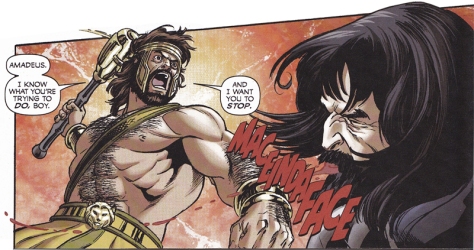 Music in this episode by: Phish, the Beatles, Queen

I shouldn’t be writing this right now.  There are about a hundred and one things I should be doing tonight rather than writing this article.  But whenever life presents me with a a to-do list the size of  a gun in a Rob Liefeld book, I usually like to blow off everything and read some comics.  So you can imagine my befuddlement with tonight’s reading, X-Men: Magneto Testament, by Greg Pak and Carmine Di Giandomenico. Not only did this book pour gasoline on my procrastination fire by being so good I had to come here and write about it, but it also doused my hopes of mindless escapism with a healthy dose of the real world. END_OF_DOCUMENT_TOKEN_TO_BE_REPLACED