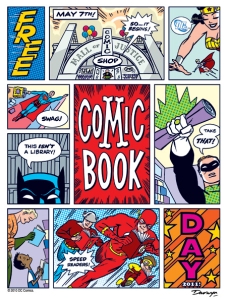 “Live” from Double Midnight Comics & Collectibles, It’s Free Comic Book Day 2011!  On this Josh-less episode, Ben is joined by frequent guest, Dan Larson of Eat Sleep Comics.  They talk about Free Comic Book Days past, present and future and run down some of the highlights of this year’s offerings.

We discuss comics movies and the fallacy of considering comics as a genre. Then, in true superhero team-up fashion, we get a visit from Dru and The Dome from the Sci-Fi Saturday Night podcast to first fight and then unite against a common foe. After that, it’s back to comic talk as Ben and Dan talk about some recent reads including Super Dinosaur, Axe Cop, Atomic Robo and The Intrepids.  Dan gives us a spoiler-free review of Thor which had just hit theaters, before turning over co-hosting duties to P.J. Huot to wrap up the show. 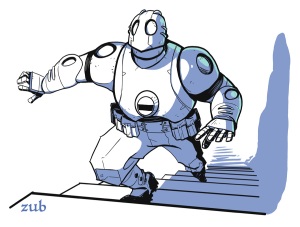 Ben & P.J. recount their trip to the Boston Comic-Con and make some startling confessions about geeky addictions just outside the world of comics.  It’s a jam-packed show and there’s plenty more to come in the month of May, with Granite State Comicon coming up this weekend.