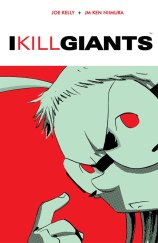 Ben, Lucas, and Dan are back with another edition of the The All-New, All-Different Near Mint Comic Book Club – where each month we take an in-depth look at one comic selection. This month the spotlight is on:

I Kill Giants is a 6 issue slice-of-life series that follows Barbara Thorson, a quirky fifth grader, who creates an elaborate fantasy world as an escape from the very real troubles in her life.  Kelly and Niimura collaborate seamlessly to blur the lines between what is real and what is imagined. The result is a story that’s both heartbreaking and uplifting. Listen as we peel back the layers of this seemingly simple story to reveal something truly giant.

Music in this episode by: Assembly of Dust, They Might Be Giants

This month, we depart for our usual Hero Initiative plug to call attention to a specific creator in need. Writer Bill Mantlo gave us some amazing creations during his all-too-brief career, including  ROM, Micronauts and most-notably Rocket Racoon – who will make his film debut in this summer’s Guardians of the Galaxy. In 1992, Bill was struck by a hit-and-run driver and left incapacitated. Members of the comics community are answering the call and we hope you’ll join us in rallying support for Bill’s ongoing care.
Donate to the Bill Mantlo Support Fund at: http://bit.ly/1fCitYF