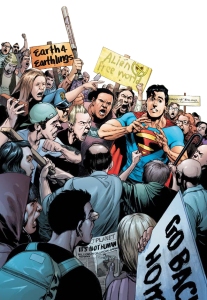 It’s been a while but we’re back with a vengeance! In this action packed issue, the boys open up with some coffee talk, including Ben’s award-winning appearance in the SNOB Film Festival, new additions to the website the upcoming NY Comic Con and the just-released Avengers trailer.

Then we get down to business and shake up the status quo as you know it. Ben and Josh (yes, Josh too) pitch a tent in the heart of DC and let thier voices be heard about the New 52.  You’ll hear rapid-fire reviews lots of the the new titles, including Batman, Batgirl, Batwoman, Catwoman, Nightwing, Detective Comics … and a few books that don’t take place in Gotham.

If you still have anything left after a lengthy DCUssion, there’s talk of Spider Island, FF, Scud the Disposable Assassin, Ultimate Spider-Man and Fall TV. It’s more geek talk than you can shake a fist at!

Music in this Episode by: REM, Urge Overkill, Weezer, Juanes