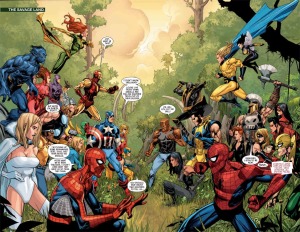 With the end of Marvel’s near year-long epic of Secret Invasion complete, now what? Well, how about some Dark Reign?

Marvel Universe ultra-scribe Brian Michael Bendis did an interview with Newsarama where he discussed the end of the Secret Invasion series and gives some clues into what is going to happen next. I think for a majority of the fans, I would say that I hope that Dark Reign is more of a running theme/storyline throughout the books and not lead toward another major event.

After House of M, Civil War and Secret Invasion, it’d be nice to have a year off from a long summer arc.

Then again, history shows that we do have events during the summer, regardless of publisher.

More on the end of Secret Invasion during the next p’cast…recorded this week!